We are PayPal Verified

PayPal is a secure and trusted payment processing service that allows you to shop online. PayPal can be used at mondaykids.com to purchase items by Credit Card (Visa, MasterCard, Discover, and American Express), Debit Card , or E-check (i.e. using your regular Bank Account).

Skip to the end of the images gallery

Capacitors are one of the most fundamental components we use for influencing the behavior of electric circuits. Capacitors can be used for storing energy, conducting alternating current (AC), and blocking or separating direct current (DC). There are many types of capacitors out there that are differentiated by the materials used in construction, each providing certain benefit features which make it better for some applications. Understanding basic capacitor construction and how different materials can affect their characteristics will give you a help with choosing the proper capacitor for your projects. They can be divided into two basic groups: electrostatic capacitors and electrolytic capacitors.

What is Electrostatic Capacitor? 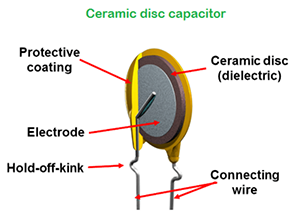 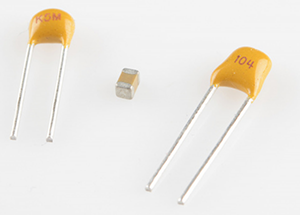 What is Electrolytic Capacitor? 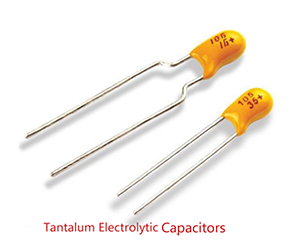 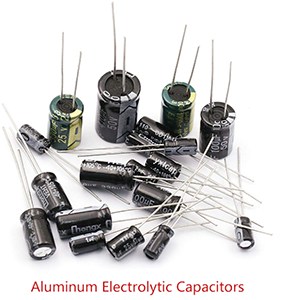 As Fig. (0.0.1) shown, two parallel metal electrode plates are separated by a non-conductive material. The non-conductive material can be known as dielectric, examples of dielectric material are glass, air, paper, plastic, ceramic and so on. Dielectric is an insulating material sits between the two metal electrode plates that to make sure they do not touch with each other and prevent large amount of electricity from flowing one side to the other directly. 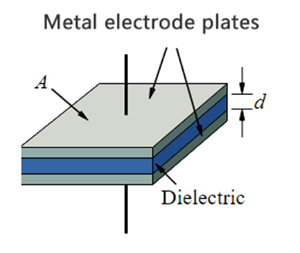 εr is the dielectric's relative permittivity

A is the surface area of each plate

d is the distance between the plates

We can learn from Eq. (2.0.0) that the following three factors determine the value of the capacitance:

Typically, capacitors have values in pF (picofarad) to microfarad (μF), the reason why we seldom see a capacitor marked as F (farad) is that because farad is a high value. To convert μF to nF or pF or to a wide range of other units and vice versa, we need to use the Electric Capacitance Unit Converter. 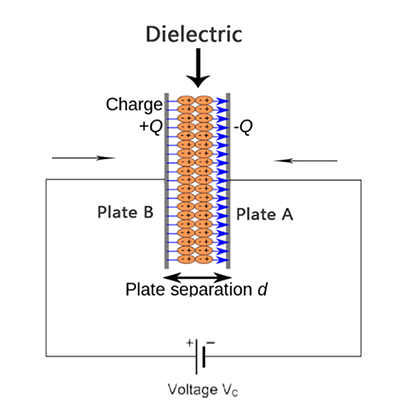 In Fig. (0.0.2), when a voltage source is applied to a capacitor, electrons move from cathode of the voltage source to Plate A, as there is an insulating dielectric region sitting between Plate A and Plate B and the electrons could not flow through to reach plate B that, the electrons are sucked into plate A. In our physical world, two electrons will tend to repel each other because both have a negative electrical charge. The large amounts of negative charges on plate A push away like charges on plate B, making plate B positively charged. The electrons that are pushed away from plate B to the anode of voltage source that, generating a current from anode of voltage source to plate B, if we put a LED between anode of voltage source and plate B, the LED will be lighted up for a while and then going out. Some beginners may say that current is the flow of electrons. No! Current is the flow of positive charged particles that the moving direction is opposite to electrons. Current behaves as positive charges carries current flow or conventional current flow. In our convention, current is an electric stream flows from the positive electrode to the negative, but what actually happens it is that the electrons flow out of the negative terminal, through the circuit and into the positive terminal of the power source. It is important to realize that the difference between conventional current flow and electron flow in no way effects any real-world behavior or computational results. In general, analyzing an electrical circuit yields results that are independent of the assumed direction of current flow. Conventional current flow is the standard that most all of the world follows.

From Eq. (2.0.3) we get that, capacitance is the ratio of the charge on one plate of a capacitor to the voltage difference between the two plates, 1 farad = 1coulomb/volt, or 1F = 1c/v. BUT please note that the capacitance does not depend on Q or V, it just only depends on the three factors mentioned in the part of Eq. (2.0.0). That means the Q and V cannot affect its capacitance once the capacitor has been made.

Since Current is the rate of flow of charges, a current of 1 A (ampere) means that 1 c (coulomb) of charges flows through a point in a circuit per second. The equations is,

We take the derivative of Eq. (2.0.4) to obtain the amount of charges in a period of time, we get, 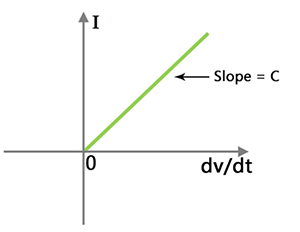 Fig. (0.0.3) is the Current-voltage/time relationship of a capacitor without resistor connected in series

dV/dt is the derivative of the voltage with respect to time. In other words, it's the change in voltage (delta V, or ΔV) divided by the change in time (delta t, or Δt), or the rate at which the voltage changes over time. The big takeaway from Eq. (2.0.6) is that if voltage is steady, the dV is zero, which means current is also zero. This is why current cannot flow through a capacitor holding a steady, DC (direct current) voltage. However, the applied voltage could not be infinitely increasing, when the voltage is continuously increased, the dielectric material will at some point not withstand the electric field between the electrodes, causing the dielectric to break down.

Charging a Capacitor with Series Resistor

When connect a resistor in series with the capacitor like Fig. (0.0.4), the things may become a little bit complicated that we cannot analyze the circuit just like the process mentioned above. We have to consider how the new adding resistor will affect the charging time of the capacitor and what would happen if we increase or decrease the value of the resistor. This is where the Time Constant comes into play. 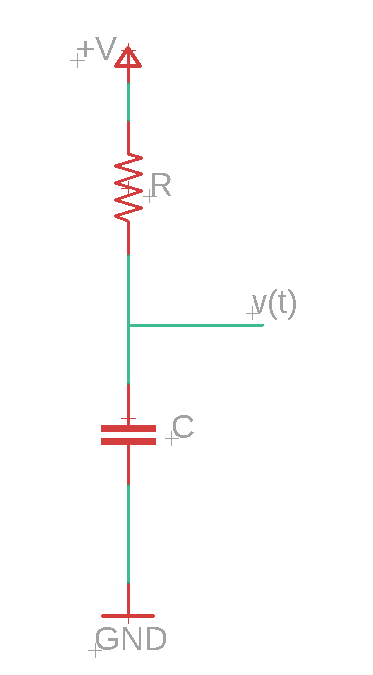 What is RC Time Constant?

Why is the Time Constant represented by RC?

Many beginners just wonder why does the Time Constant is defined as the product of the series resistance and capacitance. Here I will expound the proving process in mathematical equations.

Differentiating this equation with respect to time, we get,

from Kirchoff's law, we get, 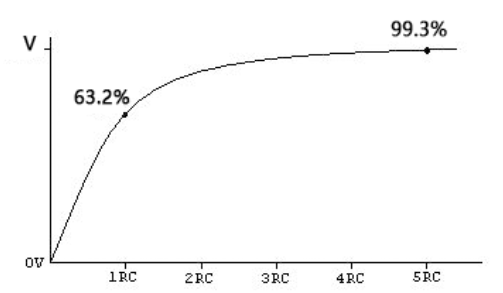 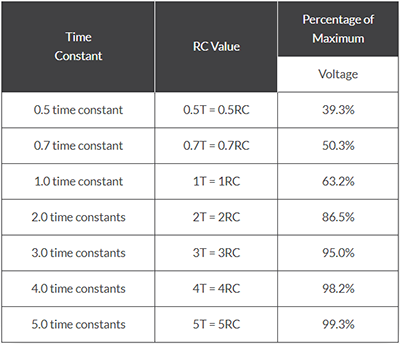 Suppose we have a capacitor, C charged up until it reaches an amount of time equal to 5 times of RC constants and remains fully charged. And then adjust the circuit that looks like Fig. (0.0.7), 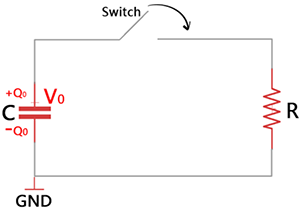 From Kirchhoff’s Law, we get,

To solve the differential equation Eq. (2.2.2), we need to intergrade both sides and get, 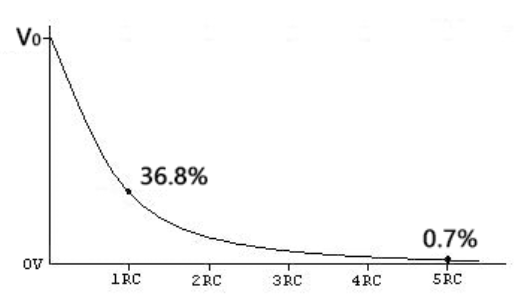 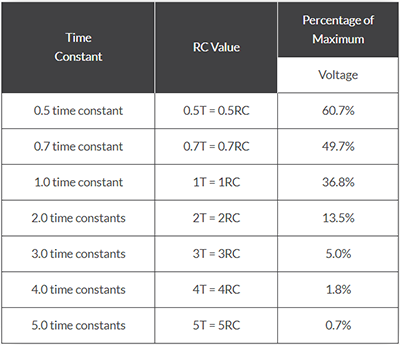 From Fig. (0.0.8), we can see that the discharging curve for a RC discharging circuit is exponential. After on constant time, the capacitor discharge down to about 36.8% of its initial voltage, V0. And then after five RC time constants a capacitor is considered to be fully discharged.

Conclusion: In an RC circuit, the time constant is the product of the Resistance, R and the Capacitance, C that is a measure of how quickly it either charge or discharge. Where, R is in Ω and C in Farads.

By Kirchhoff's Voltage Law, the total voltage applied to the series circuit, Vt is the sum of the voltage cross each capacitor, we get, 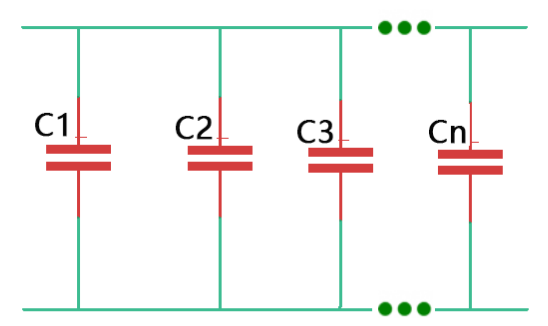 Let us replace these parallel capacitors by a single equivalent capacitor Ctotal, we get,

As we can see from Eq. (2.3.4), the total capacitance (or equivalent capacitance) of N capacitors in parallel is the sum of the individual capacitances.

Capacitor in rectifier circuit is one of the most common applications that uses both of capacitor charging and discharging features to smooth the output. We typically use the capacitors with sufficient high capacitance in smoothing circuits, such as the electrolytic capacitors. In a Full Wave Rectifier Circuit like Fig. (0.1.2), if without the capacitor, the DC voltage generated by the rectifier is consisted of half sine waves, like Fig. (0.1.3) shows, the voltage range is between zero and √2 times of RMS(root-mean-square) voltage that is not a smooth output voltage. 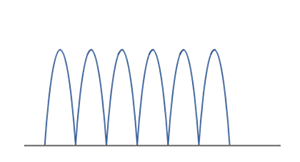 By adding a parallel capacitor to the rectifier, the output can be turned into a near-level DC voltage like the red line part in Fig. (0.1.4), 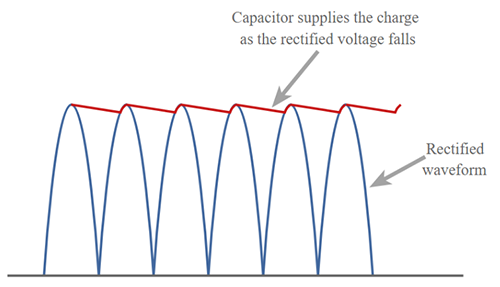 Eq. (2.3.5) tells that the choice of the capacitance needs to meet the requirement that its time constant RC is very much longer than the time interval between the successive peaks of the rectified waveform (the reciprocal of 2f in full wave rectifier circuit is the period of a wave or time interval of one cycle of the wave).

If in a Half Wave Rectifier Circuit, the equation is,

The Half Wave Rectifier output voltage is as shown like Fig. (0.1.5) 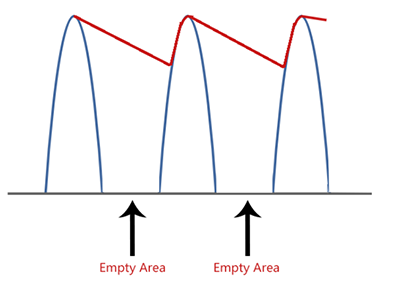